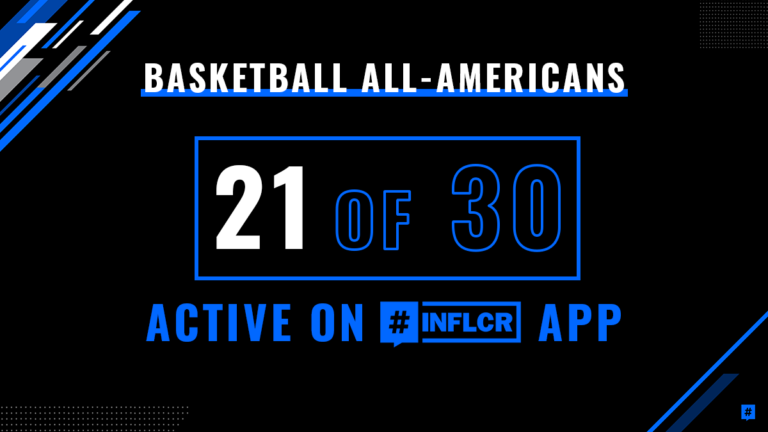 Eleven of the 15 Associated Press male All-Americans had access to team and national media photos and videos through their universities’ subscriptions to INFLCR. Their activity and reach was remarkable.

Combined, the 11 players had more than 2,300 total sessions in the INFLCR app, an average of 211 per player, during the season. They downloaded/shared more than 1,400 photos and videos. More impressively, the players collectively reached more than 900,000 followers on Instagram — an average of more than 81,000 followers per player. On average, they grew that following 92 percent during the season according to INFLCR reviews of their social-media activity.

It wasn’t just the men.

Ten of the 15 members of the AP Women’s All-America team also used INFLCR during the 2019-20 season, with each player seeing significant growth of their following as they had clean access to content. The activity was led by Oregon senior Sabrina Ionescu, whose 80 app sessions to download/share 73 content items helped her grow her Instagram audience 340 percent in just a few months.

The AP Player of the Year will move on from Oregon with more than 312,000 followers, an audience six times larger than that of the Ducks’ official team account.

Marquette University’s Markus Howard led the nation in scoring at 27.8 points per game, and became the all-time leading scorer in both Marquette and Big East history, quite a feat considering the rich basketball pedigree for both the school and conference. That excellence was recognized with Howard earning first-team AP first-team honors.

As an Academic All-Big East student majoring in digital media. Howard understood the value that authentic storytelling could have for him as a student-athlete. During his senior season, he had 289 sessions in the INFLCR app and downloaded/shared 342 content items. It helped him grow his Instagram audience 35 percent during his final season with the Golden Eagles.

“INFLCR has given myself and my team the opportunity to build our own brands in ways that allow us to be who we are and express our love for the game,” Howard said.

“With the impact social media plays on the sports industry, I’m extremely blessed to have the relationship built with the individuals at INFLCR that have propelled the way I am viewed as a player and a person through the lenses of social media.”

Michigan State senior guard Cassius Winston is another example. The second-team All-American amassed 228 sessions in the INFLCR app, where he downloaded and shared 131 photos and videos provided by Michigan State or national-media sources. The steady stream of content helped him add more than 42,000 followers during his final season with the Spartans for a total Instagram audience of more than 124,000.

For context, consider that Winston by himself has just 25,000 fewer followers than the Michigan State team account. And that’s huge in recruiting, where top players are much more likely to follow other top talents than they are to follow team accounts.

The Michigan State Basketball story is told to recruits far more consistently through the lens of the current player’ social-media accounts than it is through the team account. This isn’t speculative — this season 30 ESPN Top 100 players followed Spartan players on social media; only three followed the team account.

“It’s fun to see the body of work that these student-athletes have put together not only on the court but with their social media storytelling off of it,” said INFLCR Founder and CEO, Jim Cavale. “They have honed their branding craft by letting fans inside their day-to-day journey, pairing the content available to them inside of their INFLCR app every day, with their Instagram stories, posts and tweets. The quantity and quality of their social media audiences are also a part of their All-American resumes and took a lot of work to garner as well.”

The 2019-20 NCAA Basketball season didn’t end how anyone wanted. There was no One Shining Moment, no March Madness as the nation took steps to confront a dangerous pandemic. In some ways, that makes the story for these athletes even more personal. They didn’t get to tell the ending they wanted — but they did get to tell their season in their own way, in their own voice. And they can take that effort with them, and leverage it, in whatever comes next in their lives.