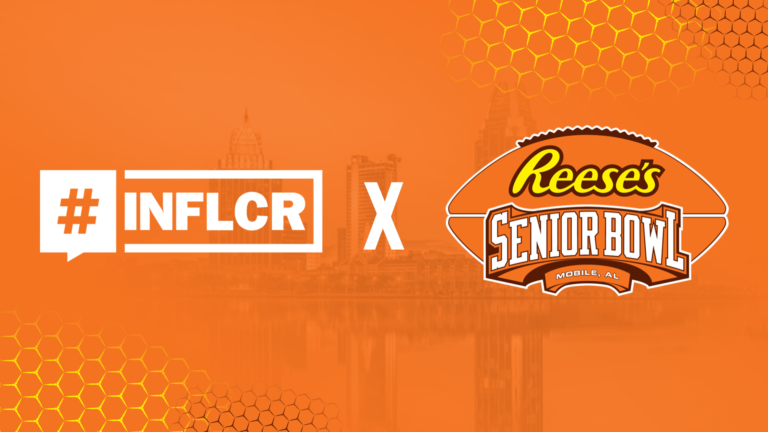 INFLCR provided real time access to photos and videos all week long to every Senior Bowl athlete. Photographers, from Senior Bowl staff and INFLCR partner USA Today/IMAGN, uploaded over 1600 photos. Athletes downloaded over 500 pieces of content and had 422,694 total engagements on Instagram posts.

From January 19 to January 28, we tracked the growth of every player’s Instagram accounts. We focused on Instagram, as this platform is heavily used by athletes. Our favorite INFLCR post of the week came from former Ohio State WR and North Team WR of the Week, KJ Hill.

Hill wasn’t on the INFLCR platform before the start of the Senior Bowl. During the week he was tagged in 14 photos, with 10 coming from USA Today/IMAGN. Of those photos, Hill downloaded half of them and ended up posting 3 to Instagram and Twitter. His overall Instagram growth reflected a successful “business trip” with an addition of over 3,500 new followers and an engagement rate of 23.4%.

KJ Hill wasn’t the only player to find growth on social. Here are the top two players in Instagram growth.

Both guys were able to share their Senior Bowl experience with their unique audiences on their own terms, and it paid off.

A large handful of the roster included players who had used INFLCR before, through their college teams. For these guys (and their staff), it was just another game week jam-packed with professional photos at their fingertips.

Last was Oregon. QB Justin Herbert is brand new to Instagram, and has only posted twice (check out his first post with an INFLCR photo). However, he downloaded 3 photos during the week from the app. Oregon’s Assistant AD of Creative and Digital Media Josh Phillips downloaded 27 pieces of content to create two posts on Oregon Football’s Instagram and Twitter.

Our INFLCR client staff members benefited during the Senior Bowl because their players had downloadable content that staff didn’t need to share with them. Plus, staff could access that same content from their own desks up to 2,600 miles away.

A number of Senior Bowl athletes joined INFLCR the moment they stepped through the door at registration. INFLCR staff got them on-boarded to the app and explained how they could access their content during the week and for the rest of their NFL career. Here are our favorite Senior Bowl posts and growth comparisons from this group:

We’ll start with former Florida DT, La’mical Perine. Perine downloaded 11 pieces of content, posted once on Instagram, and twice on Twitter throughout the week. Overall, he saw an Instagram engagement rate of 15.8% and follower increase of 631.

California’s ILB Evan Weaver downloaded 5 content pieces and posted to Instagram with two of those photos. Weaver’s engagement rate was even higher at 27.81%.

DII standout Kyle Dugger from Lenoir Rhyne was tagged in 24 photos during the week, of which 15 he downloaded. With one post to Instagram comprised of five photos, his follower growth grew by 4.47%. That one post’s engagement rate was at a whopping 38.7%.

The next two schools had several players on the Senior Bowl roster. Notre Dame and South Carolina had four and five players, respectively, in Mobile.

Notre Dame players were made up of Troy Pride Jr., Jalen Elliott (North Team DB of the week), Alohi Gilman, and Chase Claypool. Three of the four were active on INFLCR and social during the week.

Both Claypool and Elliott downloaded 11 content pieces, with Troy downloading 9. Gilman only grabbed one photo from the app but didn’t post it to any of his social platforms. For the other three, they all posted on Instagram and saw growth at the end of the week.

Two of the five players from South Carolina posted during the week and their growth results could show you who they were without even looking at their Instagrams. Four players downloaded 15 content pieces from INFLCR.

Joseph Charlton was tagged in 6 photos, downloaded 5, and saw 4.30% in follower growth. Charlton ventured outside of his tagged photos to even download a Senior Bowl team photo, a perk of being able to see all team content and not just photos you’re tagged in.

INFLCR’s second year with the Senior Bowl was a success, as we saw great usage on the app and growth on social media. Players were able to share their once in a lifetime experience with professional level content in their own words.

Whether they were already on the app or just got started, every player will continue to have content access through INFLCR throughout the combine, draft, and their NFL career. We’re looking forward to watching their stories continue to unfold.